I had a lot of fun putting together the the ‘year in review’ post that I wrote last year. Even though I didn’t do quite as much in 2018 (no new software products, no international travel, no life milestones), I thought it might still be worthwhile to summarize the year for the sake of posterity.

Almost all of my web properties grew significantly in 2018.

Aviculture Hub saw the greatest percentage increase in visitors, although remains my fourth largest site by traffic. I moved Aviculture Hub to a new domain name (aviculture.co to aviculturehub.com.au) as part of effort to focus more strongly on the Australian market. A domain with a more locally recognizable suffix will be important as the site’s eCommerce efforts ramp up. The site also received a (still in progress) redesign—using the excellent GeneratePress theme.

The fansite I run for EA’s simulation games—SimCity, The Sims 4, etc—also saw substantial traffic increases. In February, the site’s name was changed from Teh Sims to the less trademark-infringey Liquid Sims. Traffic has grown enough that ad revenue is now ever-so-slightly exceeding expenditure, so it’s officially a profitable venture. Hopefully next year we crack the 1,000,000 pageviews milestone.

There is, unfortunately, once glaring exception to the ‘substantial growth’ claim: SingularLabs. Traffic declined for the fourth consecutive year, however revenue has trended upwards over the same period.

This year I purchased a finch-keeping community, started a pet store, released a software product for bird breeders, did lots of freelance work for various pet-related organisations, and relaunched Aviculture Hub with a tighter focus on monetization.

Collectively these projects represent an attempt to carve out a little slice of the Australian pet industry. I’m excited to continue working on this, any who knows, maybe I’ll even make a little profit in a year or two.

I have never had a cat, nor do I consider myself to be a cat person. Nevertheless, when a litter of kitten was abandoned in my town, compassion compelled me to adopt one. His name is Maxie, in a two-part homage to a deceased relative named Max and to Mitch Hewer’s character from the British version of Skins. 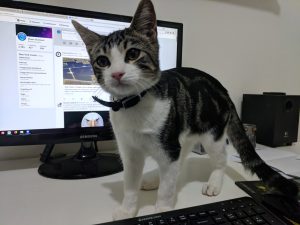 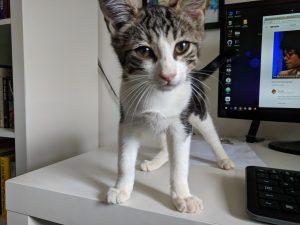 There’s more of a cat-ownership learning curve than I was expecting. It took months to get him to consistently use the litter box, rather than poop on the floor next to the box. A persistent challenge is getting him to eat properly. I have affordable access to the best cat foods money can buy, yet Maxie is reluctant to eat anything other than store-brand kibble that’s mostly corn and cardboard.

Sure, I wrote almost 100 blog posts in 2018, but they were overwhelmingly for content marketing purposes. The number of things I wrote purely for the enjoyment of writing can be counted on a single hand. In 2019, I’d like to try to write something at least once a month.

The web development and digital marketing firm I started a few years ago is currently my most profitable venture. Since the overwhelming majority of new sites we’re building are on WooCommerce, a trading name that reflects this is needed. From March-ish, Gowland Media will (likely) be known as LaunchWoo.